Stepping Into My Destiny

24 But the ship was now in the midst of the sea, tossed with waves: for the wind was contrary. 25 And in the fourth watch of the night Jesus went unto them, walking on the sea. 26 And when the disciples saw him walking on the sea, they were troubled, saying, It is a spirit; and they cried out for fear. 27 But straightway Jesus spake unto them, saying, Be of good cheer; it is I; be not afraid. 28 And Peter answered him and said, Lord, if it be thou, bid me come unto thee on the water. 29 And he said, Come. And when Peter was come down out of the ship, he walked on the water, to go to Jesus.

I’m in awe of how you can always find a new message in the Word of God.  I know that the Bible was written thousands of years ago, but it is truly a living document.  You can get something from a passage one day and get something totally different the next.  While I was preparing last week’s message, there was so much that I wanted to talk about that I couldn’t just fit it all into one message.  Every time you open the Word of God, He is ready to reveal something new to you.  If we can just avail ourselves, open our hearts to Him, have an imagination and be willing to trust Him at His Word, God is willing “to do exceeding abundantly above all that we could ask or think.” It’s according to how much we are willing to submit to God and have His way in our life.  While the storm was raging, while the seas tossed to and fro, and while fear overtook the others in the boat, Peter stepped out of his place of safety and with daring inquisitiveness asked the Lord, “bid me to come unto thee on the water.”

Destiny can be defined as

I’m going to go outside of the box and make this declaration:  Our greater days are ahead of us!  Our future looks way better than our past, but we have to bold enough to #MoveForward to take hold of our destiny.  If we’re willing to press ahead, if we’re willing to trust God, if we’re willing to get out of our comfort zones, greater lies ahead of us.  In a boat filled with at least eleven other leading men, we find that Peter was the only one that was not content with the safety that the presence of the Lord brings, but He wanted to do the things that Jesus did.  We cannot just be satisfied with superficial things that the world gives, but dare to go above and beyond what others might think is enough to be more like Jesus in our walk, in our talk, in our thoughts, in our actions, in every area of our life.  I’m talking about pressing “towards the mark for the prize of the high calling of God in Christ Jesus.”  There is a greater anointing ahead of you if you’re willing to go get it.  There is a higher calling with your name on it if you’re willing to chase after Him.  We have to put in some work and too many of us are not willing to invest into our future.  Peter was 1) hungry for more than just the status quo; 2) allowed God to order his steps; and 3) realized that the safest place to be was in the Master’s Hand.

Peter was hungry for more than just the status quo.  Peter went from fearing for his life in the storm, to not be satisfied with just merely having God’s presence.  Peter wanted more than his presence, but he wanted to build a relationship.  Jesus told them on the Mount of Beatitudes that “Blessed are they which do hunger and thirst after righteousness sake: for they shall be filled.”  Jesus often used things that we can physically understand to teach us spiritual principles.  We all can understand the pains of hunger.  Whether you forgot to bring lunch money to work or school, or you forgot to pack your lunch, or you are setting yourself aside and fasting, or we went for a long walk and the sun had gotten the best of you, we all can relate to being hungry and thirsty at some point in time during our lives.  There is a pain that comes with hunger.  There is a discomfort when it comes to hunger.  There is a weakness that comes thirst.  You’re not lucid when you’re thirsty.  When hunger and thirst takes control, you have expended all of your resources.  Physically, when our hunger or thirst is satisfied, we’re at peace with the world.  Spiritually, when we are willing to give up everything for God, we’ll be filled with everything that we need.  For some reason, we hold on to things that don’t benefit us, don’t help us to grow, don’t help us to become better and we’re worse off for it. “But seek ye first the kingdom of God and His righteousness, and all these things shall be added unto you.”  Jesus should be our focus day in and day out.  When we seek him and have to put in some effort.  Peter was the only one brave enough to not just accept the peace and calm that Jesus gave.  If you believe that greater is ahead of you, give God some praise in this place!

Though Peter was hungry Christ and willing to surrender all for Him, He sought God’s direction as he stepped out on faith.  Youthful exuberance is great, but without structure, it will end up in chaos and out of order.  Peter said, “Lord, if it be thou, bid me to come unto thee on the water.”  David was ambitious just like Peter, but he understood that he could do nothing without the Lord.  God ordered David steps everywhere he went.  When he came from working in the fields to meet Samuel, he didn’t come in complaining.  He wasn’t worried about other people were doing.  When his brothers talked about him complaining about Goliath defying the army of God, David didn't allow the naysayers to stop him from defending the God of Israel.  When his wife belittled him for dancing before the Lord, David proclaimed "I will bless the Lord at all times, His praise shall continually be in my mouth."  He didn't let anyone stop him from praising the Lord.   David understood that "The steps of a good man are order by the Lord."  Some people can’t step where God is taking you.  If we desire to be good in the eyes on the Lord, then we must allow Him to guide and order our footsteps.

Lastly, though the ship would seem to be the safest place during the time of the storm, Peter understood that he couldn’t put his trust in man-made things.  He had to put his trust in the Lord.  "O Lord my God, in thee do I put my trust: save me from all them that persecute me, and deliver me." "God is our refuge and strength, a very present help in trouble."

Each step takes us higher.  Each trial draws us closer to God.  Greater is ahead of us.  I encourage you to Step Into Your Destiny! 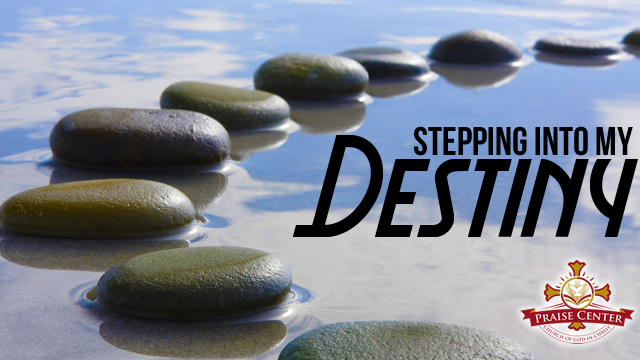