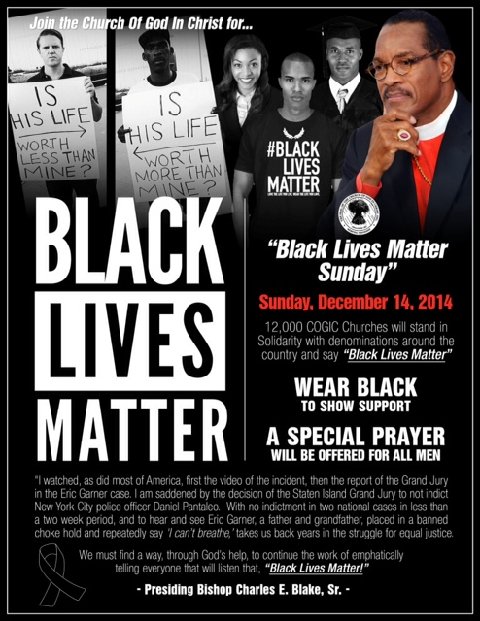 Memphis, TN (December 5, 2014) The Church of God in Christ (COGIC) is hosting “Black Lives Matter Sunday,” to remind the nation how important the lives of African Americans are.

Sunday, December 14, 2014, the Church of God in Christ (COGIC) will sponsor a day of prayer throughout its 12,000 congregations around the world, in honor of the two recent cases of African American men, Michael Brown and Eric Garner, killed by police.

Presiding Bishop Charles E. Blake, Sr. says, “I watched, as did most of America, first the video of the incident, then the report of the Grand Jury in the Eric Garner case. I am saddened by the decision of the Staten Island Grand Jury to not indict New York City police officer Daniel Pantaleo.  With no indictment in two national cases in less than a two week period, and to hear and see Eric Garner, a father and grandfather, placed in a banned choke hold and repeatedly say ‘I can’t breathe,’ takes us back years in the struggle for equal justice.”